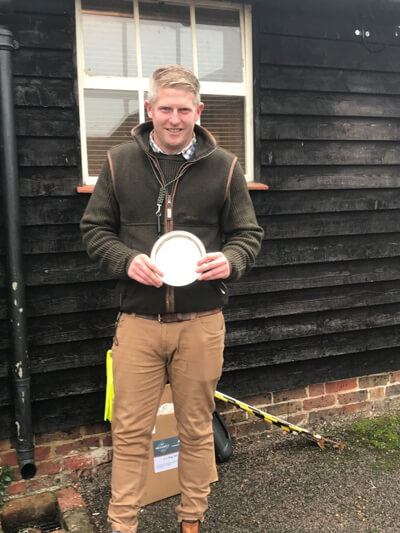 Gary Souster voted Guns Choice.
The trial had a good level of entries and was very well attended on the day.  We ran a full 14 dog card.

The day was very wet in the morning but it didn’t dampen the spirits.  The Guns stood and watched and I kept them in homemade Sloe and Raspberry Gin and Sausage rolls.

The duck drive proved difficult for a few dogs and we were down to just three competitors by the end of drive one.  We moved on to the Main Wood Drive with just three dogs. The dogs lined out and the guns shot very well and produced plenty of birds.  One dog ran in so he was out. Second dog picked up the wrong bird so out.

This left Gary Souster with his Golden Retriever, Roughbeat Estelle,  she did a nice Retrieve but the judges felt his dog wasn’t ready to move up to open so no awards given.  Gary Souster was however voted Guns Choice.
Philip Bount, Field Trial Secretary